August 27th provided a strange, cyclic high precipitation supercell moving from the NW to the SE across Central Michigan. I looked at models the night before and despite weak shear, the environment looked good for a cell or two traversing across the state, with an area running from roughly Merrill to the SE through St. Charles/Chesaning, Owosso, and Flushing having the most prime ingredients – Notably a higher than normal STP (Significant Tornado Paramater) value for Lower Michigan. I didn’t get to see much of the setup before 5pm but from the few chances I got to sneak a peak at radar while working, a storm formed up near Cadillac and gained strength. It was nice and isolated, but i noticed there was a large swath of precipitation to the east of the cell as it was strengthening. This had me thinking it was all going to become a linear piece of junk. I’m glad it didn’t because this turned out to be the ONE storm that would produce for me this year.

The cell was Severe Thunderstorm Warned by the National Weather Service out of Grand Rapids, MI for areas near and west of Clare, SE of Cadillac, where the cell went up. The cell had strong velocities on radar, which soon kind of broadened out and the cell became more of a mini hurricane heading to the southeast, but the warning was allowed to expire with no following warnings from the GR office. There remained a pretty impressive cuplet on the velocity scans, but the storm was quickly becoming HP; and with mostly highly wooded/non populated areas in the storms track, there were no reports of anything.

At this point I was finally leaving work in Bay City, MI; and began to head SW towards Gratiot County, watching the cell spin and drop rain on radar. I initially headed to an area east of Ithaca, before moving further south because of rain. I got down near the small town of Ashley, where the cell began to cycle again and the updraft popped out of the precipitation core. As I noticed the rain to the west beginning to let up, I repositioned and saw it puke out some outflow from that event, which pushed the rain out of the way, and all of a sudden a large slowly rotating mesocyclone peaked out of the clouds.

I began moving SE towards Elsie at this point. The cell gained strength very fast, and as it crossed into western Saginaw and Shiawassee Counties, was severe warned by the NWS office out of Detroit. The rotating updraft and accompanying hook echo moved just N of Elsie, where I got some amazing shots of the wall cloud, and some funnel pictures. I knew this thing was going to go insane if it could just get SOME kind of inflow going into it…It was sitting over my head spinning but at the ground there was just no movement.

I pushed through Elsie from the west and turned right to go south, so I could take more country roads to the east and get a nice clear shot in some fields. As I pushed east, I got near the small settlement known as Carland, and watched a simply MASSIVE rotating wall cloud spin across the farmlands, with a small funnel cloud visible inside. As it moved closer, I realized I didn’t have to move an inch to watch this wall cloud plow across the road from the perfect vantage point. As it moved closer, the funnel took more of a bowl like appearance in the bottom of the funnel cloud, so I took a few shots. At this point I estimate it was about a mile to my NE. I took one shot panned out a bit, which shows the wall cloud and a huge clear slot punching in from behind, and the funnel dead center. I enjoyed the shot on the preview screen for half a second..felt a breeze from the SW – and looked up to take another picture when I noticed dirt on the ground, spinning….”wait a second, that’s DOWN?”

I snapped a few pictures, one clearly showing the rotating winds at the ground and what appears to be 2 small vorticies spinning at the ground in the distant fields. After just a few seconds, nothing was visible at the ground. The bowlish funnel above did continue for quite some time, but popped a bit closer up to the base of the wall cloud. I decided to continue to the south to try and reposition again, but wanted to avoid traveling through Owosso for obvious reasons – The cell was headed straight for town, and I didn’t want to get stuck there.

I moved W of Owosso, stopped to enjoy the view for a second, then proceeded to go south and then east once I got around town. From that point, it’s nearly all heavily wooded areas, and I didn’t see much besides the fact that the cell had moved more to the east than the south, and was showing signs of weakening. I finally got to a large field somewhere south of Corunna, and looked south to see some outflow coming out and the cell dying. I began the drive home and watched the cell collapse completely. More storms were on going to my NW, but appeared to be lacking organization to become something before dark, and I had to work in the morning.

These storms eventually made their way to the south during the night, ending up in Livingston Co. and dropping two EF0 tornadoes that were confirmed by the NWS Detroit office. Several structures were damaged near Brighton and also further to the north.

*This tornado is not confirmed by the NWS, although I have sent pictures to the WCM in Pontiac and he believes it was possible with this particular cell. The tornado did not cause any damage. 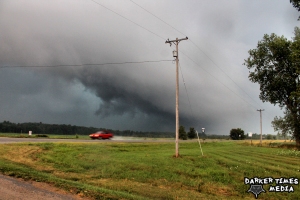 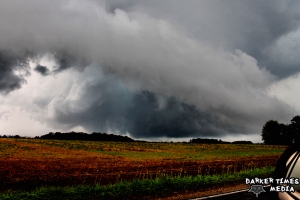 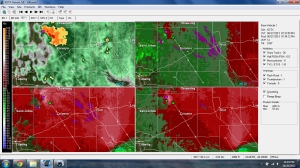 4 panel radar of the cell at roughly the moment of the brief spinup tornado.

You can see my location on Spotter Network looking straight into the hook. 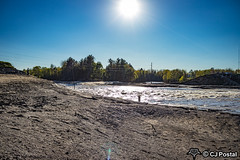 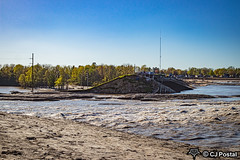 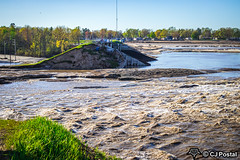